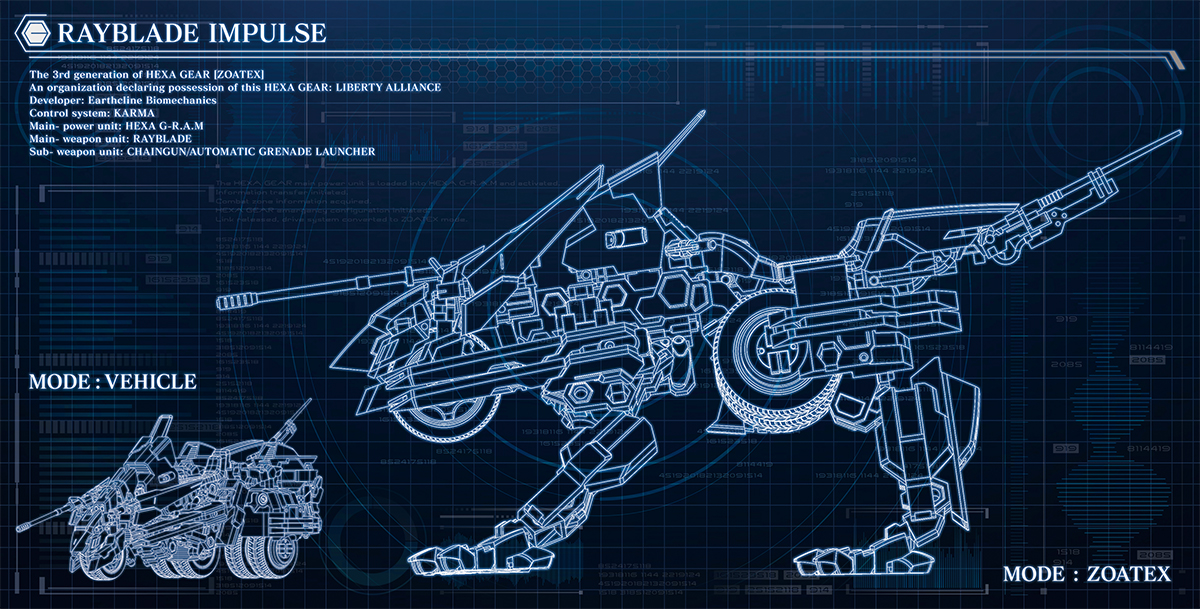 Rayblade Impulse is a high-speed assault Hexa Gear designed and created by Earthcline Biomechanics. The unit is an improved version of the high-speed battle Hexa Gear “Lord Impulse” created by the same company. Only a limited number of units were created, some of which are used by the Liberty Alliance.
The model was designed with the aim of creating the fastest battle Hexa Gear, and its astonishing level of mobility exceeds its predecessor Lord Impulse by several measures. Rayblade is also capable of using Zoatex Mode, giving it a strength that can take down any other machine when combined with its speed, making it easy for Rayblade to swiftly annihilate its foes.
However, the extremely light armor used to maintain Rayblade’s speed specifications mean that the machine has an extremely low defense level for a battle Hexa Gear. Rayblade’s high speed makes the unit physically demanding and difficult for pilots to maneuver. This feature, combined with the unit’s high level of energy consumption, meager ammunition capacity, and the fact that using its Rayblade weapons makes it impossible for the HEXA G-R.A.M to regenerate energy put a heavy limit on the unit’s battle endurance.
Therefore, with the above specifications in mind, it is necessary to utilize a large amount of support and a specialized strategy in order to use Rayblade Impulse to its full battle capacity.
In the entire Liberty Alliance army, the number of Governors who can perfectly pilot the Rayblade Impulse is extremely small, and it is more common to see the model used in individual units combined with other machines.

Although Rayblade Impulse boasts high speed and maneuverability in both Vehicle and Zoatex Mode, its stop ability is especially note-worthy. The model excels at accelerating from 0 to 100 and coming to a complete stop, which made possible by artificial muscle tissue created from modified HEXA G-R.A.M.
In Zoatex Mode, all of the legs are equipped with gravity controllers that allow the model to stand or walk on vertical surfaces and ceilings for a short period of time. The gravity controllers can also be used to execute powerful attacks that allow the model to crush armored vehicles from above.

Rayblade Impulse is also equipped with a new feature that enables it to initiate resonance excitation using the HEXA G-R.A.Ms. This feature causes all of the HEXA G-R.A.Ms to resonate in unison, allowing the model to generate an explosive burst of energy that can increase its speed and weapon power. However, this power is a double-edged sword due to the fact that after a certain amount of time has passed, all of the HEXA G-R.A.Ms will be reverted to their ground state, making it impossible for them to emit energy until they are fully recharged.

Rayblade Impulse is controlled by the AI “KARMA,” which was designed to grow along with a Governor. The machine is difficult to handle, but if an experienced KARMA and Governor can operate as one, Rayblade Impulse’s power is unrivalled, as has been proven by one specific Governor.

This weapon physically breaks down the model’s HEXA G-R.A.Ms and directly converts the resulting particles into external energy. These energy particles circulate within a controlled field to form a blade shape. Created by resonating all of the model’s HEXA G-R.A.M units simultaneously, this “Blade of Light” can destroy any material with ease. The power of this weapon is clearly excessive for the scale of the model, and deviates from the typical standards.
Although it is a powerful weapon, the Rayblade has a short range of 10 meters, and is only effective when used by Rayblade Impulse because of the model’s high movement speed and maneuverability.

Although the Rayblade requires the renewable energy of the HEXA G-R.A.M, the energy consumed by this weapon does not regenerate, and the particles emitted by the HEXA G-R.A.M when the weapon is activated contaminate the surrounding area. For this reason the weapon technology is considered to go against the principals of the current society and is not used by SANAT.
The Rayblade was produced along with Rayblade Impulse in the Earthcline Biomechanics research facility, but after the fall of the facility the weapons were confiscated and the current number of existing units is unknown.

This live ammunition autocannon is equipped to the model’s head next to the sensor. As an older weapon model, this weapon does not utilize the HEXA G-R.A.M’s unless it senses the target’s movement. The weapon can be used in both Zoatex and Vehicle Mode.

This automatic grenade launcher has been used since the early generations of Hexa Gear. The number of grenades is limited, but the type can be changed out depending on the situation. In addition to explosive and scatter shots, the launcher can also be loaded with rubber shells and gas bombs for peace-keeping missions as needed. 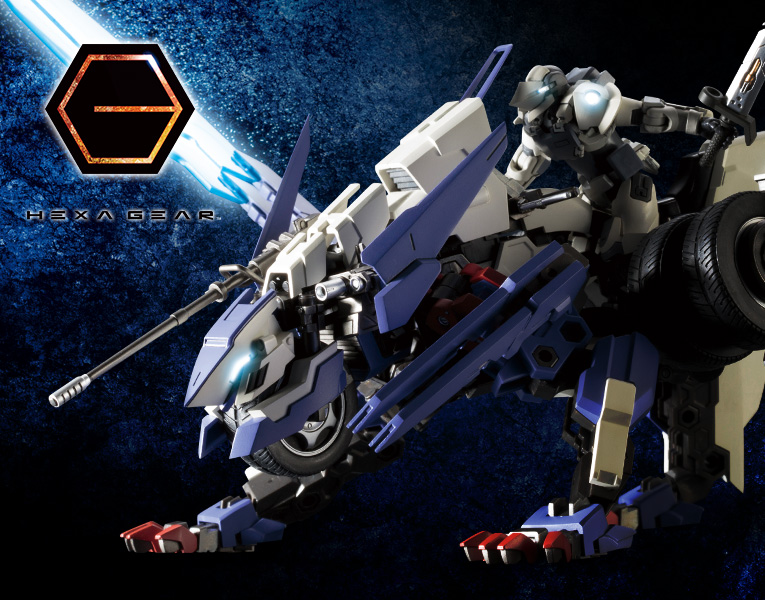