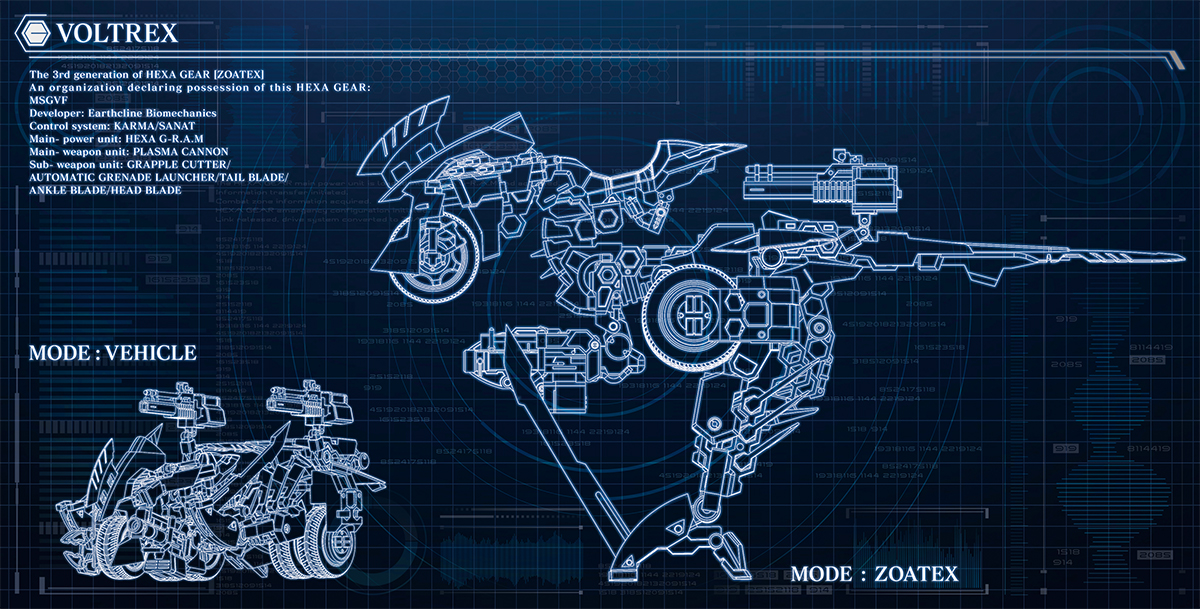 Voltrex is a multi-purpose all-terrain Hexa Gear designed by Earthcline Biomechanics.
Voltrex was released as a successor to the second generation Hexa Gears, which were primarily heavily armored and bipedal in order to abate the high production cost of Hexa Gear at the time. While Voltrex is also bipedal when Zoatex Mode is activated, the model is equipped with stability controls and a scanning device that allows it to stand and move easily on uneven and unstable terrain. This stability makes Voltrex a reliable shooting platform, giving this Zoatex-capable machine a unique characteristic that makes it similar to the traditional weapons used in ground combat.
Voltrex’s characteristics make it ideal for coordinating different types of squadrons, making it the best model type for coordinating large groups. Some parts of the internal frame use the same standardized units as Lord Impulse, which was developed during the same time period. The two models are considered to be “sister machines,” which is evident in Voltrex’s firepower-oriented design which acts as a counterpart to Lord Impulse’s speed and mobility-oriented build. Compared to Lord Impulse, Voltrex’s large arsenal of weapons lowers its overall mobility.

The model’s primary weapons are two miniature Plasma Cannons, but it is also equipped with an assortment of mid-range weapons that make it extremely versatile in a variety of situations. It can also be customized with weapons that were not included in the original build, and several variations customized for specific mission types have been developed.

Voltrex’s superior balance of cost and utility initially made it a highly sought-after machine amongst the Liberty Alliance’s Governors, but most of the units currently in use belong to the Valiant Force. The reason for this is that when Earthcline Biomechanics transitioned from the development phase to the production phase, it became necessary to consign the units to another dockyard operated by a different corporation. When MSG fell under the control of SANAT and began its initial round of invasions, the company was not able to fend off SANAT’s cyber attacks. In the blink of an eye, the management system for the entire city and all of its facilities including the dockyard were overpowered, cutting off all communications to and from the region and disconnecting it from human society (such incidents were a common occurrence at this time).
At the time of the incident, there were over 100 Voltrex models in fully-operational condition, and an estimated 600 partially completed units in the production line. This incident also gave SANAT access to the technology for Zoatex Mode, leading the armed conflict to grow into an unforeseen stalemate.

The Governor data from the Voltrex units’ KARMA AI operating system was erased and the units were placed under the control of SANAT. Due to the fact that only a small number of KARMA systems were stored in the facility at the time of the incident, it is assumed that SANAT is controlling the machines through remote access or one specific proxy unit that has special operation functions.

This high-powered plasma weapon is installed on the model’s legs. Plasma weapons are one of many types of weapons developed using the HEXA G-R.A.M’s energy supply capabilities, which allows them to convert the surrounding atmosphere into plasma and shoot the plasma in high speed bursts through electromagnetic induction. The weapons installed on Voltrex are an extremely compact and lightweight design at the cost of several other features, but nevertheless they still harness an exceptional level of destructive power given their specifications.
The cannons use a HEXA G-R.A.M unit that is independent from the main unit, allowing Voltrex to operate the weapons with no impact on the machine’s energy consumption levels. The weapons can move independently of the model’s legs, giving them a line of site from any angle. The weapon’s specifications were modified by MSG after its requisition of the Voltrex units by increasing the number of shots available and giving it continuous fire capabilities, greatly increasing the strength of the weapon.

These striking and slashing weapons are equipped to the outer frame of the model. The blades can be expanded and extended, allowing the model to mow down surrounding enemies in a wide radius and acting as balancers when the machine moves in a circle. When the model is in Vehicle Mode, the blades are primarily used for attacks from behind.

This is a cutting device configured into the right forearm. This weapon can be used for a variety of purposes, including cutting wire entanglements. Some Voltrex units are customized to have Grapple Cutters on both arms, allowing the unit to destroy the frame and outer armor of enemy machines. However, this configuration makes the machine’s range incredibly small, and is not recommended as a battle tactic. Despite its shortcomings, the weapon is valued by military engineers because of its ability to be separated from the machine and transported freely while maintaining its shape.

This automatic grenade launcher installed in the left arm of the model has been used since the early generations of Hexa Gear. The number of grenades is limited, but the type can be changed out depending on the situation. In addition to explosive and scatter shots, the launcher can also be loaded with rubber shells and gas bombs for peace-keeping missions as needed.

This axe-like blade was designed to give the model an upper hand in head-on confrontations with other Hexa Gear. 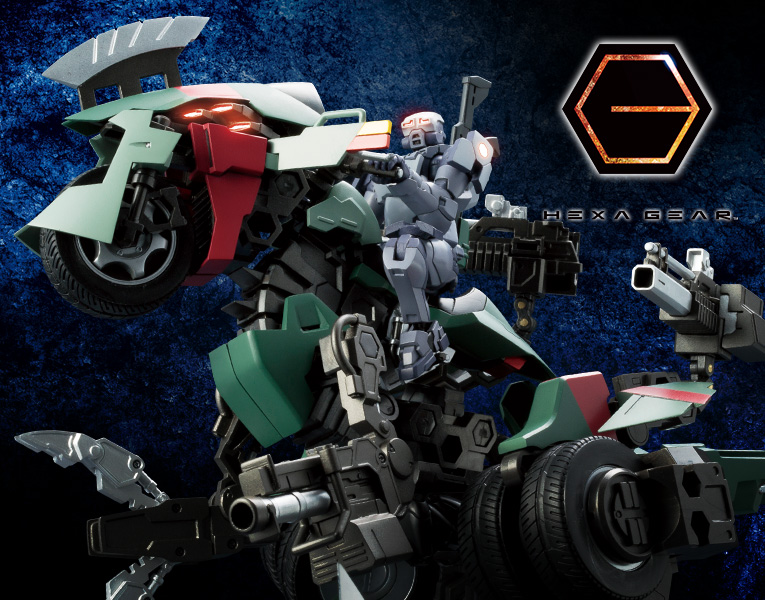